The writers of the future...

It was a class of 32 for the Write Like an Author Camp (devised by author Brian Falkner) that I taught at Remuera Intermediate last week (from April 15th to 18th) - 33 on the Monday when we had one extra booked for the junior day. They were a terrific bunch of students (average age 12), approaching everything with gusto and taking everything in like super soaking one way sponges. There were a mysterious couple of lads who never answered at roll call or put up their hands to answer questions, like a pair of stealthy ninjas - there but not there - except that one did fill in a feedback form and both their certificates were gone at the end of the final day so I feel fairly confident they weren't a complete figment of my imagination. In class we covered the elements of story, character, and suspense, narrative, dialogue and action, and a lot more. We played games and they won points for their teams. I read some of the amazing stories they were working on and couldn't help but admire their burgeoning skills. They seemed to have a good time and the majority of them are keen to do more courses in the future, which is a great sign. I wish there'd been camps like this when I was their age - I would have jumped at the chance to participate in something that would have fed into my obsession with reading and writing so well. I wonder whether I would have admitted my writing ambitions earlier, and kicked off my career sooner? But my only regret now? That I was so very focused on teaching last week, that I did not stop to enjoy their company as much as I should have. What a lovely group of smart, switched-on kids. I wish them every bit of luck with their writing in the future and hope we get to meet again. 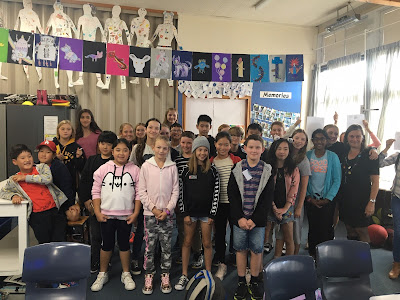 Success is a moving target...

Success is a moving target.

Before I had anything I'd written published, getting something (anything?) published was my measure of success. And before I was published it seemed to me that this was the only foot in the door I needed. Once I was published I would be on the 'success road' where publishers knew my name, gave considering my work priority over unpublished writers, and called me to chat about ideas. Lol. There's a fantasy musical in there somewhere.

Of course, I soon discovered that staying published was the next goal, and the challenge, surprisingly, was greater than the hurdle of getting that first thing published. Who knew? (Apparently everyone but me).

Then came the secret desire to be shortlisted for an award. And to win something. People say awards are a bit of a lottery, but I can't lie about finding them desirable. I regret this desire regularly but I can't help myself. I am working on being at peace with this.

I didn't expect the win when it came. Children's Choice at the 2009 NZ Post Children's Book Awards for my picture book with Sarah Anderson, The Were-Nana. Yes I did look shocked. It rates as one of my happiest moments in my writing life. But it didn't open doors the way I thought it might. I think there have been ripples of results from this, but somehow I'd assumed waves were the normal outcome. I've gratefully received a few other nods over the years although I haven't won a category or the big prize at the NZ Book awards so I don't know whether these have greater door opening capacity or not. I suspect asking someone who has won would give mixed answers. There are so many variables that influence how success looks for that winning author/book.

Success has meant a lot of different things along the way. Some small and some big. And it's a constant readjustment, and sometimes a complete recalculation. Sometimes publication success has been elusive and results have been focused on invitations to speak, or tour, or present. Or the chance to write uninterrupted. Or completing a story. Or writing more than 50 words in a day.

Success right now is still very much about staying published. For a career writer this measure is a constant. What are my other current measures? I'll let you know if they come to pass. Sometimes I worry if something big happened that it would be overwhelming and I wouldn't handle that success well. I am however, willing to test this out. Lol. I mean, who would say no to some big kind of writing success. Of course, there's the fact that what qualifies as a success in my opinion might be of no importance to someone else. You have to make your own measures.

I'd recommend keeping them realistic too. It's okay to have tiers of success to aim for. Like Bronze, Silver and Gold. Of course the higher up you aim, the better your chances of reaching a higher goal, but don't make that success unreachable. I'd also recommend always regularly renewing what you consider success means to you. The world, and the book world, are constantly shifting and evolving. You need to shift and evolve with them. Remember too that the success you planned for might have surprising, unexpected outcomes. And it is even possible these outcomes can be negative. Success can sometimes end up being little more than a big fat learning experience. It pays to get adept at finding the silver linings. And perhaps most importantly (especially because I suck at this), learn how to enjoy any success that comes your way. Stop and smell that rose. Water it. And polish it occasionally. It's beneficial to remember the good things along the way because sometimes the next good thing you hoped for doesn't happen. And sometimes the only success you need is that you are still here, still writing, still being hopeful.

Posted by Melinda Szymanik at 7:47 PM No comments: