I think it's fair to say that children's writing is often seen as inferior to writing for adults. Many children's writers can tell you about the times they've been asked when they are going to write a proper book, a grown up one, for 'real' people. Children are viewed as incomplete adults in need of a lesser (or incomplete) literature. But age based immaturity does not = simple. That's just patronising, and rude.

On occasion I've told myself that I just prefer reading books for children and that is why I write them, but then I remember I've read and continue to read plenty of books written for grown ups - classic literature, literary prize winners, crime novels, thrillers, romance and more - and often enjoyed them and sometimes adored them. So it's not that that sways me to write for children.

The truth is I think writing is a vocation, a calling, a compulsion, or a curse if you like. I have a need to write that is not bound by rational thought or reason. If I try to escape it, it sticks a story worm in my head while whispering 'gotcha.' I write stories for children because these are the ideas that come to me and where my skills seem to lie. I don't ever remember a moment when I consciously chose to write for a younger audience over some other group. I just did. I think the die was cast when the curse was thrown. I think maybe writers for adults are the same. To ascribe some superiority to something you didn't choose seems a bit on the nose.

You don't control it. It's how your vocation, your compulsion, has manifested itself. Some writers can write for both adults and children but they are the exception, not the rule, and their vocation has been generous (and to imply this means writing either is easy seems a little disingenuous). And I think some writers who do both are clearly better at one over the other and they have strayed from their calling. And some writers who attempt a particular kind of book because it must be easier than their other preferred form usually demonstrate why this is patently not true.
Posted by Melinda Szymanik at 6:51 PM No comments:

Labels: adult vs. children's literature, wittering, writing as a vocation

The ephemerality of ideas ...

I am often asked where I get my ideas from. And I think a lot about what my answer should be. Giving a truthful answer can feel a lot like telling you how to herd cats or how to hold on to a live eel, or draw a picture of something in constant motion. The moment an idea comes to life can so often take little more than a split second. Not all of the contributing elements are visible or obvious, and even though you have hold of the idea in that instant, it may not fully reveal itself until you've worked through it. So the answer is complex and often incomplete. And the way it works for me may not be exactly the way it works for you. It is a magic trick, a sleight of hand, with fluid rules


But with all that said, here are some thoughts on getting ideas that might be helpful

1. Ideas NEVER come when they're called. They prefer to sneak up on you when you're least expecting them, and I swear, sometimes they seem to work very hard to do it when it is most inconvenient for you. So I don't go and 'get' ideas, I just happen to be there when they turn up ... looking for a host. And part of my host responsibility is being relaxed and open. The harder you search for ideas the more elusive they can be. And if you look at them directly they will vanish, so a sideways glance is always best.

2. Less than 30% of all my ideas become a successful story. Less than 30% of those stories are published. Those odds don't sound fab. But a lot of what appear to be great ideas in the beginning often just fizzle away to nothing under scrutiny. I think this is completely normal and it doesn't cause me any concern. And I reckon truly good ideas are uncommon. If you think about the books you've read where you've really been wowed by the idea behind it you won't be talking about hundreds of books. Great ideas don't turn up every day. They're not meant to. Crikey that would be exhausting. Don't panic if you are not floating in a veritable sea of hot ideas - no one is. And don't worry if not every one of your ideas works out. Ideas that don't work out can have two issues - 1) they were never going to work because they've already been done to death/the plot just won't work/despite your best efforts it's really only half an idea/etc... or 2) you are not yet ready to write this idea in which case you keep everything you have already written on it and keep busy on other projects until you can do it justice.

3. The best ideas are born from things that you find fun, surprising, intriguing and/or thought provoking. When I said your mind needs to be relaxed and open, I certainly didn't want to imply it should be empty. Ideas cannot spark inside a vacuum. Read, watch, experience things you enjoy, that matter to you, that make your brain skip and soar and crave. From serious news articles to memes and youtube clips, everything becomes grist to the mill.  A little heart melting video of a chicken running to greet a beloved human was the spark for my most recent picture book story. But it was a throw away comment on a friend's facebook post containing a photo of a chicken that truly set the wheels in motion. Now I must wait to see if this idea that made it to the 30% that turn in to complete stories, makes it through to the next round of stories that become books.

4. There is no rhyme, reason, pattern or sequence to any of this. I can go months without a new idea although I am continually trying potential ones on to see if something develops. It is important to not get anxious about not finding something good to write about. As mentioned above those ideas inevitably turn up when you get busy with other stuff.

5. Don't panic if at first your idea does not seem to be whole. When I get an idea for a book it often initially appears as the tip of an iceberg, with a raging (but hard to justify) confidence that the rest of the ice is there under the water. The act of writing it down will usually tease the rest of it out. Sometimes it needs to be lured or enticed. Chocolate and compliments (yes you ARE a beautiful idea) work best.

6. While most of my ideas coalesce in an instant (even if I don't immediately have a grasp on all aspects), there are occasionally some which are slow burners, where something intriguing that I can't quite put my finger on keeps tumbling slow motion through my mind. The fact that I can't shake these thoughts reminds me to give them some space and freedom and to pay attention from time to time to see if they have ripened. There is no telling how long the slow burn might take. It can be weeks, months or even years and should not be rushed.

7. If you want to write, you will get ideas. It is important to believe that this is true because there is no reason why self fulfilling prophecies can't also be positive ones. If you embrace writing and keep your mind well stocked, be confident that the ideas are out there, waiting for you.
Posted by Melinda Szymanik at 5:03 PM No comments:

Labels: getting ideas, self belief

Occasionally I get sent books for review. I've been reading most of my life and a significant proportion of the books I have read are books for young people. I have completed an English Lit degree and a diploma in Children's Literature and I also write, as you know. I think a lot about what makes a good book. I know my taste in books is different to other people's tastes, and I know readers have a range of needs and desires they want satisfied when they pick up a book. But ultimately I am always striving, as a writer and a reader, to make/find books that are, and do, more. The ones that surprise my tired brain in a good way.

The most successful picture books might appear simple but they contain multiple layers of meaning and avenues for exploration that can be peeled back and examined with successive readings. They prompt discussion with peers and parents, teachers, grandparents and others. A good picture book will say different things to readers at different ages, while connecting, entertaining and challenging them all. They leave the reader richer for having read them. The best ones linger long in the mind after you have closed the book. I know there are many fine picture books out there that don't achieve these things, but these are the things I am looking for when I pick one up. I want to fall in love and I am always ready to do so.

Review – A Kaleidoscope of Butterflies by Kate Hursthouse (Little Love, an imprint of Mary Egan Publishing, 2018) 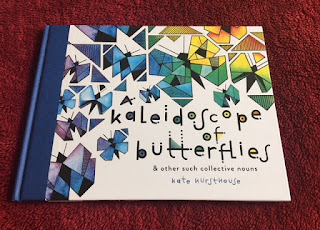 I was sent a review copy of A Kaleidoscope of Butterflies and I was excited at the idea of this book. Collective nouns are a real pleasure trove for the creative mind. A sleuth of bears, a murder of crows, a gang of buffalo, a cauldron of bats and a pounce of cats. The list is thrilling and long. I couldn’t wait to see what Kate Hursthouse had done with this.

The quality of the book production is lovely and the pictures bold and vivid (the tiger illustration is great), with some cute characterisations and interesting application of geometric shapes.  Yet I desperately wanted the illustrations to riff more on the collective noun itself or for there to be some additional subtext or story telling in the pictures. One of the most effective in terms of the collective name is the kaleidoscope of butterflies, but many of the others felt rather inert and aimless. And while ‘herd’ appeared twice, it felt like some of the most fun collective nouns were missing. I also found a number of the pictures cluttered and the fonts very hard to read, especially where the text was in close proximity to, or tangled with, the illustrations and this will make things difficult for emerging readers. There was so much promise in the idea, but in the end this book hasn't quite got there.

Posted by Melinda Szymanik at 9:09 PM No comments: