I suspect there may be an assumption outside the publishing world, that if your books are published they are automatically sold outside of New Zealand as well as locally. Just as we see all sorts of books from overseas for sale here in New Zealand, so must our books travel to other countries.

But it's not a given. The reality is generally pretty modest. Many books that start their publication life here don't escape the gravity of this country. I guess it's partly that some overseas publishers may find our stories too local in flavour and believe they won't fly in other parts of the world. Or that without the authors/illustrators presence to drive promotion the book might struggle to succeed. Or maybe it's something else. Several of my books have been published and/or sold in Australia in addition to New Zealand which has been great. One of my picture books has had a modest foray into other territories. We all hope that our books will be picked up by overseas publishers. That their appeal and value is international. That they have a life, an audience, beyond this country. I have watched wistfully as some other NZ children's authors and illustrators have had some international success.

So I'm really pleased to say that an English language edition of my picture book Fuzzy Doodle, illustrated by Donovan Bixley, is to be published by Scholastic Asia in October. This is the first time one of my books has been picked up by a major publisher outside of Australasia and it's quite a thrill. I'll post up some more info as it comes to hand. And watch this space as I think I'll have to do a give-away soon in honour of this cool news.

July has been almost solely for writing and I have made good progress on my new WIP. August, however, will be focused on other things and I'll have to manage my time more carefully to enable me to hang out with my manuscript. I have some school visits at the start and end of the month and the big night for the New Zealand Book Awards for Children and Young Adults on August 14. I'm off to Dunedin August 11th and 12th for some events associated with the book awards, and on August 19 I'll be running another workshop on Picture Book Writing at Selwyn Community Education. There will be lots of information on what picture books should and shouldn't be, some hands on writing exercises and some good oil on publishers, competitions and submitting. If you think you might be interested in attending you can find more details and register here. If I don't see you there, I'll see you on the other side.

Posted by Melinda Szymanik at 3:30 AM No comments:

Late one night, late in 2013, a funny little phrase popped into my head as the engineering inside my conscious mind began to power down for the night. It was a rhythmical rhyming phrase and I liked the idea, sound and shape of it so much, I got up, found some paper and a pencil and wrote it down. 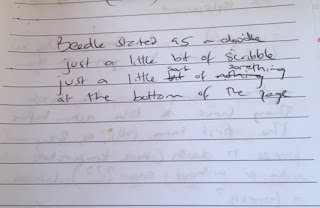 
The next morning I didn't muck around. I grabbed a piece of paper and started writing, to see where that first stanza might take me. Maybe my subconscious had worked on it overnight, maybe a clear head after a good night's sleep was what did it, but it all came pouring out. The central conceit, the metamorphosis, and (what I felt was) a most satisfying conclusion. I transferred the story onto the computer and began to rewrite and refine. While not strictly rhyming, the text had developed a particular rhythm and it was fun to play with language techniques, particularly as the techniques, in addition to the words themselves, supported the key themes. As I reflected on what I'd written I felt excited at the destination I'd arrived at from that very simple beginning. I could see one main thread of the text gave a mental nod to The Very Hungry Caterpillar, but there were other influences too. The first thought as I'd lain in bed the night before had been of Beedle, which has a lovely structure/mouth feel/rhythm all it's own. Of course many of us have heard this name through Rowling's The Tales of Beedle the Bard, but I was just playing with the word in my head, and words like beetle and doodle and a few other two syllable sound alikes. It was just random thinking, word play, where I suspect a lot of good ideas are born. I'd thought about Emily Gravett too, and the self-referential metafictiveness of her work. Of course dear reader, as you will know, Beedle became Fuzzy. Despite the buzz of inspiration that first night, 'Fuzzy' became a better fit with the picture I had in my mind, of that first little doodle. More reader friendly too, I thought.

Once I'd launched off with the idea of a doodle that comes to life in the margin of the page (where many doodles start their lives in the real world), it seemed obvious that (like a caterpillar) the doodle would be hungry and on a page what is there to eat but words and pictures. The act of consuming culture can make us creative ourselves. Just like the doodle, we can experience a creative metamorphosis. The ideas grew and wrapped back around themselves and the more I thought about it, the more layers I could see in what I was writing. I love layers. It is always my goal when writing to make an iceberg out of my narrative with the text visible above, and a whole lot of ideas going on below. Or maybe it's a cabbage. Or an onion.

Of course the text is only part of the story when it comes to picture books. I sent the manuscript off to the publisher, Scholastic, and in November 2013 they signed the story up for publication. The hunt began for an illustrator and in 2014 Donovan Bixley came on board. His schedule meant waiting until mid 2016 for publication, but it was so worth the wait. His artwork picks up on everything in the text and extends it. All deceptively simple and yet it is what good art should be. Beautiful, and inspiring and empowering.

Since Fuzzy Doodle has been published, readers have broadened the discussion of what it all means. During a school visit on my recent tour of Northland with Storylines, a teacher asked me if the book was autobiographical,and straight away I said yes. I hadn't consciously thought of it that way but of course he was right. On that very first night when that phrase popped in to my head, and when I began to work the story the very next day I knew that things I've seen and read and watched and smelt and tasted and touched coalesce into ideas, and become my books. And then in the best kind of magic, my books can become grist in the creative mills of others. One of my biggest thrills has been discovering that young readers previously not confident in their own creative skills have been encouraged by the book to make all kinds of art.  After all, stories begin with one simple idea popping into our heads last thing at night, and art can grow from that little doodle in the margin at the edge. 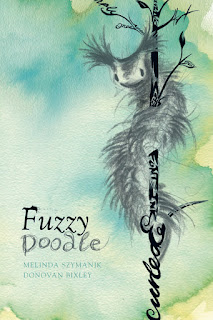 Posted by Melinda Szymanik at 5:54 PM No comments: