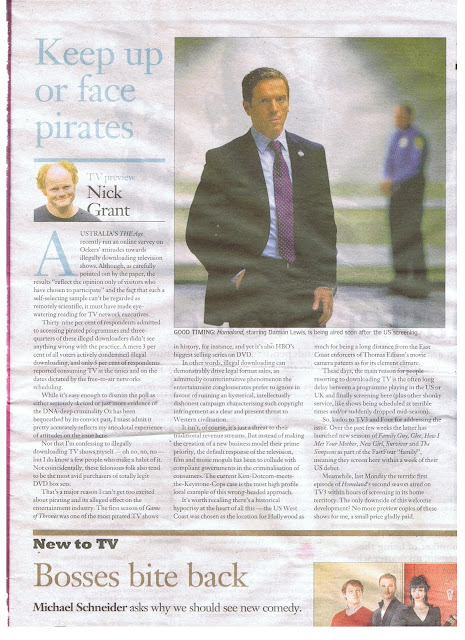 On October 7th I read this View piece by Nick Grant in the Sunday Herald. Mr Grant says he 'can't get too excited about pirating and its alleged effect on the entertainment industry.' Thing is Mr Grant, perhaps you would feel more excited if someone else was making money out of your creative content while you received nothing. Sigh.

I sent in this as a reply:


I was somewhat irked to read Nick Grant's TV Preview piece on illegal downloading in the Herald on Sunday View section (7th October). As a creator of content whose material has been illegally downloaded more than 3,000 times in the last year without a corresponding increase in sales I take exception to the oversimplification of this issue. Yes I still do hold out hope that illegal downloads may benefit my sales in future but focusing on this ignores the fact that someone else is still benefiting financially from the illegal provision of material they do not own or hold license to, whether it is music, movies television programmes, books or some other art form. I doubt very much if any of Kim Dotcom's 2010, $42 million income went to the creators of the content his subscribers enjoyed. And many other companies benefit in the millions from providing download sites or having other associations with them. I also feel concerned that Mr Grant's lack of excitement over pirating reinforces a general attitude toward obtaining content for free. If that is the culture we create, that it's all right because everyone is doing it, that it’s only the big companies like the movie studios who object, or that this is just about politics, then I may be even less able in the future to earn a decent return from content I work hard to produce. If Mr Grant would like to give his writing away for free then he is most welcome but I can't afford to think like that.

It got printed (mostly) in this Sunday's Herald (October 14th). I get frustrated that the whole issue seems to have been swamped by the politicking over Kim Dotcom and the media's subsequent delight in watching Labour and National butt heads over this. It is too easy to forget (as Nicola Morgan has said) that there are not-so-well-off individuals at the sharp end of this issue. Still, very pleased that the Herald gave me the chance to air my opinion on this. 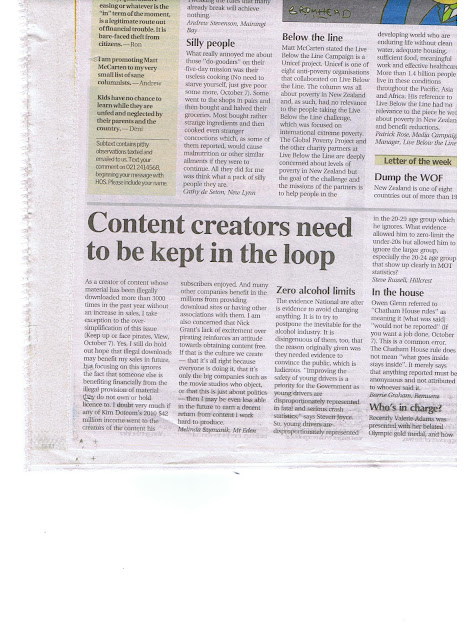 Posted by Melinda Szymanik at 5:10 PM

Well Said!
I wonder how Mr Grant would feel if his column was picked up 3000 times by other newspapers and he didn't get a bean from it...