Why I changed my mind about trying to get to Bologna

The past few weeks have been a little busy. I ran a Write Like an Author camp for school students last week at Ponsonby Intermediate School, and the week before I had the opportunity over several days to meet with some Chinese publishing representatives. They were here on a whirlwind visit and it was just by chance I became involved. It was nerve wracking, not least because every culture has its own etiquette for conducting business, and I wanted to get off on the right foot. Enormous thanks to fabulous fellow author Maureen Crisp, who metaphorically held my hand, gave me some great info and shored me up when I wavered over the two days. I'd learnt a lot by the end of that week, and had many subsequent thoughts about international publishing deals and book fairs.

Last year I had been considering a trip to the 2020 Bologna Book Fair (in conjunction with some other travel we were planning). I have my short story collection from last year, and two picture books coming out this year which I had thought would be at this fair (they're both a little delayed so it might be 2021 before they make it to Italy). I thought I could support those books, and tick the BBF off my bucket list. And I was still wrankled by the comment an Australian agent had made at a children's writing conference I'd been at in 2009 - that taking an author to a book fair was like taking a cow to an abattoir. I talked to several folk experienced in the ways of the BBF about the whys and wherefores, and emailed a Bologna contact that I'd got from one of my publishers.

Our travel plans changed. But that happened after I'd already dismissed Bologna as a destination for me. And here's why, although I disagree with the Ozzie agents notion/rubbish joke, I think a traditionally published author like me going to a book fair is not the best use of my resources. My thoughts and opinions on this are my own, but they are an objective response to what I have observed and been advised.


1) For book fairs, generally, you must be in a position to sell the rights for your work. Otherwise you can't do business there, or support your books (this is just not an arena you can support your books in -  publishers and agents are not there to talk to authors, they are there to recoup their investments - this is probably where the abattoir comment comes close), you are just an observer.

2) For book fairs, generally your work must already be in published form in one territory, and you are looking to sell rights for other territories. Agents and publishers might be able to sell a manuscript at a book fair, but the odds of an (unknown outside your own region) author doing so, I imagine, would be very slim.

3) If you are an author and/or illustrator, you will only be in a position to sell the rights to your already published work if you are self-publishing, or if you have kept all those rights back in your arrangement with a traditional publisher (uncommon), or have had them returned

4) They may like your content, but the unusual design/format which helped your book stand out in the local market may make it difficult for them to take your already published work on

5) You may feel your content is universal, or at the least, general, but cultural differences and topics/themes of interest vary hugely, impacting on your ability to be picked up in other territories. For example, the differences in the role of parents in picture book stories in New Zealand compared with in China, are vast.

6) One other way to attend a book fair, like the one in Bologna, is as a speaker. But your international currency needs to be sufficient, and you need good public speaking experience and a spot of good luck to get this kind of gig. And it is difficult to say how much this would help my books.

7) It's expensive to get and stay there, which must be weighed against any benefits accrued to me as an author, through sales of rights and/or books. I have a number of skills, but selling is not amongst these. It is better (and significantly less costly), for me to pass this task to someone with these skills, with a track record of successful sales, for those rights under my control. Bologna is a trade fair for publishers and agents - a marketplace for trading rights for publishing and translations. Everyone there has paid a lot of money to be there, and they want to recoup their investment by buying rights they can make money out of, and selling rights to other territories. Selling rights is nothing like submitting a manuscript. Here it is likely your books will sell better without you.

Posted by Melinda Szymanik at 3:08 PM No comments:

The need to be hopeful...

So, as much as it is dominating social media and msm and conversations everywhere, I'm not going to talk about the current state of the world. It is an existential nightmare and I intend to help where I can, but better minds than mine are highlighting the issues involved and I can't improve on that. What I can say is that creating beautiful things that help explain the world or give relief to people is still vital. Now more than ever. So I am trying to stay updated and informed.

When the world is a bonfire and you write for children there are extra challenges in reflecting their world back at them. They are growing up into this world and need hope and practical strategies to navigate their future. How do we explain things without freaking them out and giving them anxiety about what lies ahead. They need reassurance and advice. Leavened with fun and wit. And hope. So it's important that creators like you and me keep our own hope alive. Some days I'm not sure how to achieve this. At the grass roots we have so little control or power. Perhaps focusing on how we can help our audience is one way we can maintain hope and do our bit to contribute positively.

I guess though that maintaining a hopeful front when you feel anything but, can be a bridge too far. Self care is paramount. This is where reading can be a good strategy. If children can find relief in literature, so can we, while simultaneously being reminded of the power words (and story) have to give us the support, tools, and ideas for surviving whatever is thrown at us, and the hope we need to keep going, including with the writing. Don't stop now people, the future needs us.

Posted by Melinda Szymanik at 4:33 PM No comments: 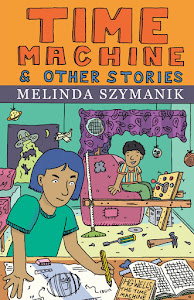