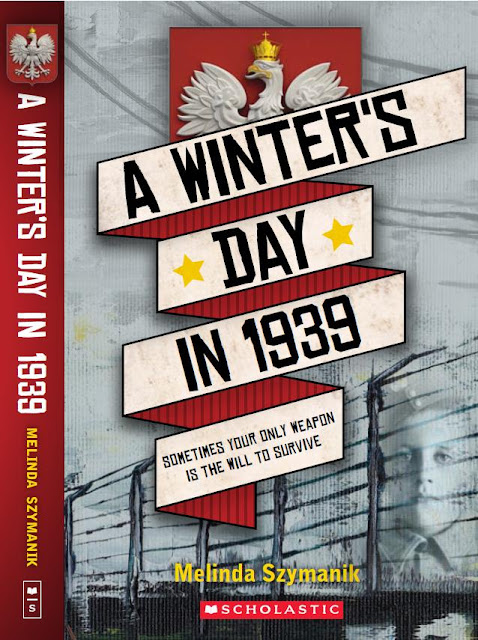 The boy on the front cover is my father...(designed by Book Design).

The book has been reviewed on radio by Kate De Goldi and Kim Hill (you will need to scroll down the list) here and by John McIntyre of the Children's Bookshop in Wellington here. There are other reviews here, here and here.

When the Soviet soldiers come and order them out, Adam and his family have no idea where they are going or if they will ever come back.  The Germans have attacked and the world is at war. Boarding a cattle train Adam and his family embark on a journey that will cover thousands of miles and several years, and change all their lives forever. And mine too. Because Adam’s story, the story told in my new novel A Winter’s Day in 1939, is very much my Dad’s story.
I often heard fragments of this story from my dad when I was growing up.  It was shocking, and sad, and amazing.  My Dad’s family was forced out of their home and taken to a labour camp in . It was freezing cold, and many people died from disease or starvation. Even when the Soviets finally let them go, they spent weeks travelling around the , were made to work on Soviet farms and were still hungry and often sick, with no idea of where they might end up next.  As a child growing up in a peaceful place like it was hard to imagine the real dangers and terrible conditions my father experienced.
I didn’t get to know the full story until I was grown up with children of my own and was regularly writing stories for children.  I wrote a short story, also called A Winter’s Day in 1939, based on a single event I knew fairly well  from my Dad‘s childhood – when Soviet Soldiers first come to order them off their farm, the only home my father had known up till that point in his life. The story was published in The Australian School Magazine.  I showed the short story to the publishers Scholastic who liked it too. They wondered if I could turn it in to a novel.  This was a chance to tell my father’s story. By now I knew it was an important story that should be shared
Luckily my Dad had made notes about his life during World War Two; about twenty pages all typed up.  However I know people’s real lives don’t always fit into the framework of a novel and I knew I would have to emphasize some things and maybe leave other things out.
I read and researched to add the right details to the story. And asked my parents lots of questions. How cold was it in in January 1940? Who or what were the NKVD? What were the trains like? What are the symptoms of typhoid? How do you make your own skis? Some information was hard to find. Some of the places that existed in the 1940s aren’t there anymore. And people didn’t keep records about how many people were taken to the from or what happened to particular individuals. But what I wanted to give readers most of all was a sense of how it felt to live that life.  So this then is the story of a twelve year old Polish boy in the during World War 2 that all started on A Winter's Day in 1939.
Posted by Melinda Szymanik at 3:03 PM

Any chances for to book to be available in Poland? :)

At the moment the book will only be available in New Zealand and Australia from March onwards but hopefully people outside these countries will be able to buy it from websites like fishpond.com. If it becomes more widely available I will post details on my blog and on goodreads

Hi Melinda
I'm a teacher at Halcombe School (near Feilding in the Manawatu area) and one of my reading groups has just finished reading your book. They have really enjoyed it. Would you be interested in answering their questions/skyping/communicating with these kids in some way to discuss the book? You could email me at dsimpson@halcombe.school.nz.

I would love to hear from you. Want to ask me a question? Want me to visit your school, library, group and talk about writing? Want to find out where you can buy my books? Then send me a message at melindaszymanik@gmail.com